This page is structured as follows:

If you're unfamiliar with using the macOS terminal, then feel free to follow the many guides on the internet. For example:

Macworld: How to use Terminal on mac (opens new window)

openHAB is packaged as a platform independent zip archive. Installation is as simple as unziping it into a unique folder. First, make sure that your system meets the prerequisites.

You have the choice to use the current stable version or the latest snapshot build:

The following instructions are performed in a terminal window. At first launch of the terminal, you will be inside your home directory.

Choose a folder name to host your install. Be aware that the path to this folder must not contain any spaces. The path chosen here is openhab.

Next, unzip the file downloaded earlier. Assuming that you have downloaded the stable build to your download folder, the command will be:

Check that the zip extraction was successful by using the ls command in order to check the contents of the folder.

If you see something similar to the above, then you're all set to launch openHAB for the first time.

The first run may take a while to process, wait until the "openhab>" prompt appears, for example:

Without closing the terminal, open your favorite web browser and type the following URL: http://localhost:8080 (opens new window), you should see the openHAB welcome screen, and you're all set to using openHAB. 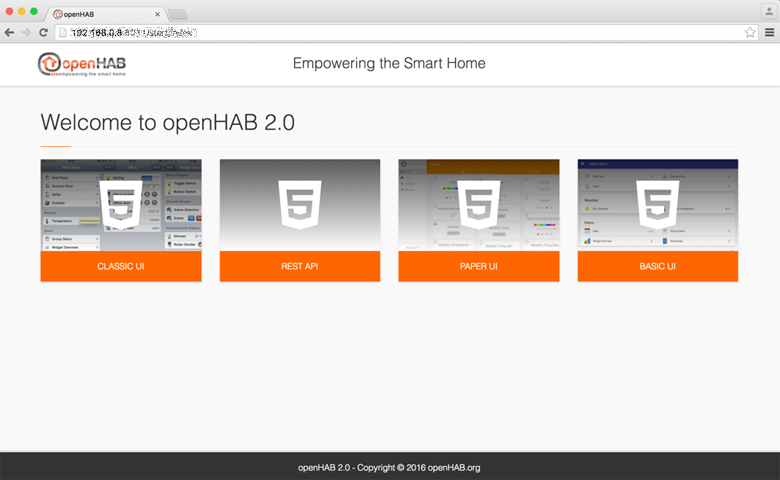 openHAB can use a script to update to any other version, or from stable to snapshot and visa-versa.

From version 2.1.0, openHAB is distributed with the update script included. This script should be called from within openHAB's root directory. Assuming the openHAB directory is in ~/openhab, simply run the following commands to update to the next major version of openHAB:

You can also specify any version as a parameter. For example, to switch back to 2.0.0:

To make a backup of your openHAB 2 system, you need to retain your configuration and userdata files. As of version 2.2.0, you can use openHAB's scripts for storing your configuration in a zip file. From the terminal: By default, the script saves the zip file in /var/lib/openhab2/backups for automatic installs and openhab2/backups for manual installs. You can change the default path by setting the $OPENHAB_BACKUPS environment variable.

To restore from these generated files:

If you're unsure how to use the above files, just use --help or -h: