It enables you to authenticate, control, and obtain information of a Light Panel's device. The binding uses the Nanoleaf OpenAPI (opens new window), which requires firmware version 1.5.0 (opens new window) or higher. 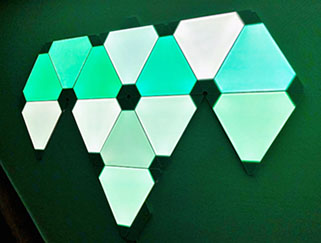 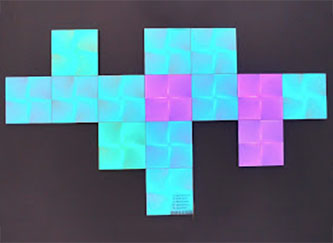 Currently Nanoleaf's "Light Panels" and "Canvas" devices are supported. Note that only the canvas type does support the touch functionality.

The controller thing is the bridge for the individually attached panels/canvas and can be perceived as the nanoleaf device at the wall as a whole (either called "light panels" or "canvas" by Nanoleaf). With the controller thing you can control channels which affect all panels, e.g. selecting effects or setting the brightness.

The lightpanel (singular) thing controls one of the individual panels/canvas that are connected to each other. Each individual panel has therefore its own id assigned to it. You can set the color for each panel or turn it on (white) or off (black) and in the case of a nanoleaf canvas you can even detect single and double touch events related to an individual panel which opens a whole new world of controlling any other device within your openHAB environment.

Note: In case of major changes of a binding (like adding more features to a thing) it becomes necessary to delete your things due to the things not being compatible anymore. Don't worry too much though as they will be easily redetected and nothing really is lost. Just make sure that you delete them and rediscover as described below.

Adding the Controller as a Thing

To add a nanoleaf controller you need to go to your inbox in Paper UI, press the plus sign which starts a scan (you can of course use habmin for that as well). Then choose "Nanoleaf Binding". A controller (also known as bridge) device is discovered automatically through mDNS in the local network. Alternatively, you can also provide a things file (see below for more details). After the device is discovered and added as a thing, it needs a valid authentication token that must be obtained by pairing it with your openHAB instance. Without the token the light panels remain in status OFFLINE.

The binding supports pairing of the device with your openHAB instance as follows:

Once your openHAB instance successfully requested and stored the authentication token in the controller's thing configuration, the controller status changes to ONLINE, and you can start linking the channels to your items.

Tip: if you press (2) just before adding the item from the inbox it usually catches the auth token right away and if you are lucky it already automatically starts discovering the panels in one turn (see below).

Adding the invidual light panels as a thing

After you have added the controller as a thing and it has been successfully paired as described as above, the individual panels connected to it can be discovered by starting another scan for the Nanoleaf binding (e.g. from the Inbox in Paper UI). All connected panels will be added as separate things to the inbox.

Troubleshooting: In seldom cases (in particular together with updating the binding) things or items do not work as expected, are offline or may not be detected. In this case

Knowing which panel has which id

Unfortunately it is not easy to find out which panel gets which id while this is pretty important if you have lots of them and you want to assign rules to it. Don't worry: the binding comes with some helpful support in the background the canvas type (this is only provided for the canvas device because triangles can have weird layouts that are hard to express in a log output)

Disclaimer: this works best with square devices and not necessarily well with triangles due to the more geometrically flexible layout.

The controller thing has the following parameters:

The lightpanel thing has the following parameters:

The IDs of the individual panels can be determined by starting another scan once the controller is configured and online. This will add all connected panels with their IDs to the inbox.

The controller bridge has the following channels:

A lightpanel thing has the following channels:

Nanoleaf's Canvas introduces a whole new experience by adding touch support to it. This allows single and double taps on individual panels to be detected and then processed via rules to further control any other device! Note that even gestures like up, down, left, right are sent but can only be detected on the whole set of panels and not on an individual panel. These four gestures are not yet supported by the binding but may be added in a later release.

To detect single and double taps the panel's have been extended to have two additional channels named singleTap and doubleTap which act like switches that are turned on as soon as a tap type is detected. These switches then act as a pulse to further control anything else via rules.

If a panel is tapped the switch is set to ON and automatically reset to OFF after 1 second (this may be configured in the future) to simulate a pulse. A rule can easily detect the transition from OFF to ON and later detect another tap as it is automatically reset by the binding. See the example below on Panel 2.

Keep in mind that the double tap is used as an already built-in functionality by default when you buy the nanoleaf: it switches all panels (hence the controller) to on or off like a light switch for all the panels at once. To circumvent that

More details can be found in the full example below.

The following files provide a full example for a configuration (using a things file instead of automatic discovery):

If you define your device statically in the thing file, autodiscovery of the same thing is suppressed by using

in the bracket to identify the uniqueness of the discovered device. Therefore it is recommended to the give the controller a fixed ip address.

Note: To generate the authToken:

Note: If you did autodiscover your things and items:

Note: The mappings to effects in the selection item are specific for each Nanoleaf installation and should be adapted accordingly. Only the effects "*Static*" and "*Dynamic*" are predefined by the controller and should always be present in the mappings.